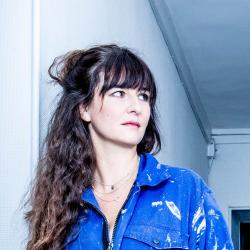 Virtual Gallery
Biography Artistic Process Awards / Exhibitions
During her studies at the Beaux-Arts de Paris, Aurélie Bauer collaborated with fellow artist Patrick Faigenbaum, which greatly shaped her artistic vision. Having graduated, she then worked with François Boisrond for whom she would become an assistant for ten years.
Her pictorial language had an immediate impact on the Pierre Levy gallery in Paris, which organized her first solo exhibition, as well as the Flowers Gallery in London, which offered Bauer her first collective exhibition. A few years later, Parisian gallerist Sébastien Adrien invited Bauer to exhibit alongside other artists whose work he showcased regularly, such as Bernard Rancillac, Leo Gaillard and Jacques Bosser.
For several years, Aurélie Bauer has been part of the collective “Les soirées dessinées” sponsored by Marc Desgrandchamps, whose works reside in established museums such as the Musée d'Orsay, the Centre Pompidou, the Musée du Luxembourg, the Museum of Architecture, the Angladon Museum or the Cognacq-Jay Museum. Aurélie Bauer's works have been exhibited around the world and are also part of numerous private collections.
The Artist's Workshop
It was following the loss of an artist friend dear to Aurélie Bauer that she was inspired to pay tribute to her colleagues by creating works on canvas that took inspiration from their studio spaces. Her paintings thus transpose us to the very heart of creation, mixing intimacy, experiences or even the exaltation of the birth of a unique work. In this way, Bauer reveals a new visual realm that is, most of the time, inaccessible.
As Pierre Berthier, Art Historian and Critic notes: “With her tender, pacifying sensitivity, Aurélie Bauer invites us to enter these reserved worlds and happily transforms a modest, often disorderly and confused reality into poetic fiction. It is both a pictorial and graphic report."

See all
Painting in the cinema
The works that constitute this series by Aurélie Bauer highlight the relationship between painting and cinema through framing, light, subject matter and the alle- gory of the window as the gateway to an outside world.
This is how the artist presents her own interpretation of scenes from films such as "The Courtyard Window" and "Death on the Trail" by Alfred Hitchcock, "Stiletto Heels" by Pedro Almodovar, or even "The Mirage of Life” by Douglas Sirk.
Aurélie Bauer's canvases are grouped according to their aesthetic themes, such as blocks of colour and the films this might reference, their differing use of black, the integration of tropes specific to the film industry, the inclusion of pop culture ele- ments, the emptiness or busyness of the setting, the gesture employed by the characters or figures, or indeed the dramatic use of light.

Written on the wind

Written on the wind 02